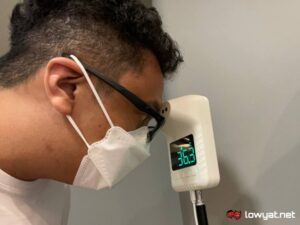 Following the recommendations made by the Ministry of Health (MoH) last month, temperature checks and the usage of a manual logbook at business premises and offices will be officially removed from COVID-19 SOP later month according to Defence Minister Hishammuddin Hussein.

Originally meant to detect individuals with a temperature of more than 37.5C before they enter crowded areas, MoH has since found that temperature screening has no effect on stopping the spread of COVID-19 infections. As for the logbook, Health Minister Khairy also said that it is not being used for contact tracing.

Hishammuddin said that the COVID-19 Quartet Ministers Meeting has decided to implement the new directive starting from 11 February 2022 onwards. However, businesses and offices can still retain temperature checks and the logbook if they wish.

In fact, the government are encouraging them to maintain these practices says the minister. Of course, it goes without saying that MySejahtera check-in, vaccine status verifications, facemask, and social distancing are still firmly part of the COVID-19 SOP list.

The post No More Temperature Checks and Manual Logbooks From 11 February Onwards appeared first on Lowyat.NET.