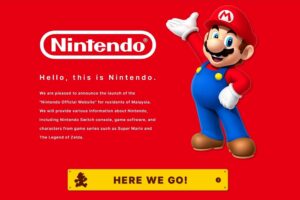 Back in October last year, we saw Nintendo setting up a website specifically for Singapore. Now, it looks like the company has set up a Malaysian website as well.

That being said, it shares a lot of similarities to its Singaporean counterpart. One of the first things you’ll notice is the same welcome page, with the country being changed to Malaysia. Then there’s the same serial number-esque code for each of the games in their own page. Which is very unlike the Nintendo of America website, which spells out the name of the games in the URL.

Another similarity that the Malaysian website has with the one for our southern neighbour is the fact that there’s no mention of price on the website. This is relegated to the Lazada and Shopee online store pages. But unlike the Singaporean site that links its own stores, Nintendo Malaysia links instead to M.M.Soft Malaysia, which is the official regional distributor, also known as Maxsoft.

So what does this mean for Nintendo fans in Malaysia? That remains to be seen. Hopefully more is to come, but for now though, beyond people being more likely to come across a direct line to M.M.Soft, it looks like things will mostly be the same. After all, this doesn’t mean there will be a Malaysian eShop, though here’s hoping I’m wrong on that point.