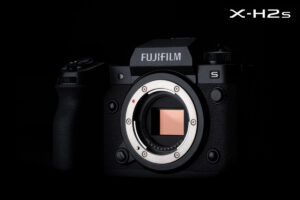 Fujifilm has unveiled its latest X Series flagship mirrorless camera, the Fujifilm X-H2S. It is touted to feature the brand’s latest imaging processor and image sensor, as well as improved autofocusing capabilities and video performance.

The new X-H2S sports the compact design of the brand’s recent X Series cameras while also retaining several features from its predecessor, such as a top-facing LCD mono display and heavy-duty build. According to Fujifilm, the device measures at 136.3mm in width, 92.9mm in height and 84.6mm in depth, and weighs with and without battery at approximately 660g and 579g respectively.

Aside from the usual dials and buttons, on its back is a 5.76m dot OLED electronic viewfinder (EVF) and a 3-inch 1.62m dot vari-angle LCD touchscreen. The new camera also comes with two memory card slots (SD and CF express Type B), a USB-C port, a HDMI Type A connector, microphone and headphone jacks, Bluetooth 4.2 connectivity, and supports the brand’s proprietary NP-W235 Li-ion battery.

Under the hood of the X-H2S is the first from Fujifilm to pack its new 26.16MP X-Trans CMOS 5HS sensor, which is both stacked and backside-illuminated. It is paired together with yet another new piece of hardware from the company, the X-Processor 5 chip, which is claimed to feature twice the processing power of its predecessor – enhancing overall image fidelity at lower ISOs and reducing noise at higher ISOs. In tandem, the two allow the camera to achieve blackout-free continuous shooting at up to 40 fps, write over 1,000 frames continuously when shooting JPEGs at 30 fps and snap up to 20 fps in RAW through its electronic shutter. Also featured onboard is an in-body image stabilisation (IBIS) system that provides up to seven stops of stabilisation.

Fujifilm says the X-H2S also comes with a new autofocus (AF) system with Deep Learning technology that improves subject detection and tracking, even in low-contrast environments. On the video side of things, the camera supports internal recording of 4:2:2, 10-bit Apple ProRes HQ, ProRes 422, ProRes LT and ProRes 422 Proxy, as well as resolutions of up to 6.2K at 30p, 4K at 120p and 1080p at 240p. It is also worth noting that the new shooter is also the first from the company to contain F-Log2, which is claimed to provide over 14 stops of dynamic range.

According to a recent post by the official Fujifilm Malaysia account on Facebook, the Fujifilm X-H2S will be sold locally at RM 11,888 for body only. The same update also revealed the pricing for the new lenses that launched alongside the camera, namely the XF18-120mm f/4 LM PZ WR kit lens and XF150-600mm f/5.6-8R LM OIS WR telephoto, which will retail at RM 4,108 and RM 9,138 respectively.

The official Fujifilm press release states that the new flagship mirrorless shooter is slated to ship out in early July 2022. However, it is not specified whether the estimated date also applies to the Malaysian market.

The post Newly Announced Fujifilm X-H2S To Retail In Malaysia For RM 11,888 appeared first on Lowyat.NET.