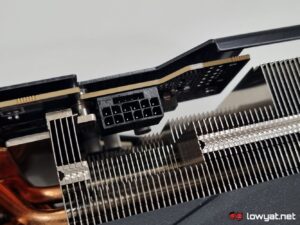 NVIDIA’s GeForce RTX 40 Series is already set to hit the shelves starting October yet there are already issues pertaining to the new PCIe Gen5 power port that is being deployed. What sort of issue, you ask? As it turns, it’s about the new 12VHPWR cable and how it has the potential to become a fire hazard.

The issue was first reported by Steve Burke over at Gamers Nexus (GN), who told his audience that PCI-SIG, the group that governs PCIe standards, had sent out an email regarding the 12-pin (4x 8-pin) PCIe Gen5 cable and that the new power cable standard was shown actually running the risk of actually melting during use.

Credit where it’s due, it was NVIDIA who discovered the issue with the PCIe Gen5 cable and reported it to PCI-SIG, as it was running multiple tests with different prototypes of the cable and PSU.

PCI-SIG says that one of the causes behind the PCIe Gen5 cable actually melting – besides the fact that running 600W of power through what is effectively a thinner-than-average cable – is wear-and-tear and more to the point, constant plugging and unplugging of it from the card.

There are reports that suggest that 30 and 40 connection cycles is par for the course in the lifecycle of a power connector, PCIe Gen5 standard notwithstanding. And if you’re an average PC gamer who’s only looking to get a card, install it, and forget about it until its first dust-out, that’s fine too.

The problem we see here lies with tech media, DIY, and the PC overclocking community; because some of us have no choice but to do the assembly and disassembly dance, this revelation about PCIe Gen5 does somewhat concern us.