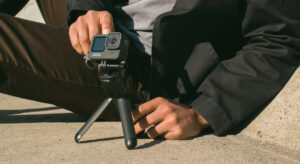 GoPro has introduced a new grip for its action cameras known as the Volta. Not only does the accessory feature integrated camera buttons for one-handed controls, it also comes with a battery pack that substantially extends the attached camera’s own.

The Volta’s introduction may finally put to rest the battery life woe that many have experienced with the GoPro Hero 10 Black. According to the company, the grip’s onboard 4,900mAh battery could further extend the action camera’s usage by up to three times, enabling it to record up to four hours of 5.3K resolution videos at 30 fps. Additionally, GoPro says that the newly launched accessory is also compatible with the Hero 9 Black.

Of course, the Volta also comes with other tricks up its sleeve. As mentioned earlier, it features integrated camera buttons to control an attached action camera, and could even function as a remote control for up to 98 feet away from a connected device. Meanwhile, you can unfold the bottom half of the grip to become a desktop tripod as well, which is useful for vlogging.

On its own, the new Volta grip is priced at US$ 130 (~RM 547), but you could score it for just US$ 91 (~RM 383) if you’re a GoPro subscriber. Alternatively, the company is also offering it together with a GoPro Hero 10 Black as part of the new Creator Edition bundle, which also comes with a built-in directional microphone, 3.5mm mic and HDMI-out ports, and LED lighting. This combo will set you back at US$ 834.35 (~RM 3,513) [currently discounted at US$ 531.95 (~ RM 2,239) via GoPro’s official website]. There’s no word on whether the Volta or the new Creator Edition bundle is planned to be sold in Malaysia just yet.