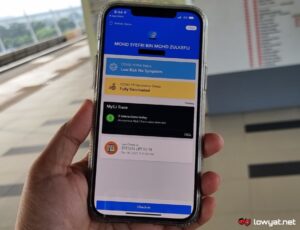 After it was released to Android and Huawei users earlier this month, the new MySJ Trace feature for MySejahtera is now available to iOS users. The arrival of the app version 1.1.4 also marked the end of the Check Out option that was deployed to MySejahtera back in September.

Just like the Android version of the app, MySJ Trace on iOS does not carry the beta label as per the version for Huawei devices. Unlike those platforms, the feature somehow does not require iOS users to turn on location permission for it:

MySejahtera’s developer has also said in this FAQ [pdf] that MySJ Trace can only run in foreground mode inside iOS which means it will only function when user’s iPhone or iPad is active. Among the data collected by MySJ Trace includes Unique User ID (UUID), app version & platform, timestamp of the encounter between users, and a Received Signal Strength Indicator (RSSI) measurement, according to the same FAQ.

The document also said that the MySJ Trace supports devices with iOS 10 or newer but then again, the MySejahtera app itself requires at least iOS 11. Users can update their MySejahtera by going to the app’s listing on the App Store within their iPhone or iPad and then press the update button.