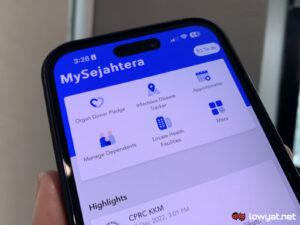 The Ministry of Health has announced the expansion of the appointments feature on the MySejahtera app. According to Health Minister Dr Zaliha Mustafa, the new update is to address the long-standing issue of overcrowding and long wait times in government health facilities such as Klinik Kesihatan and public hospitals.

Among the services that can be booked through MySejahtera include outpatient treatment, visits under the National Health Screening Initiative (NHSI), pre-employment & education medical check-ups, PeKa B40 health screenings, and pre-marital screenings. In addition to that, the feature also covers consultation sessions for the Quit Smoking initiative and family planning in addition to various minor medical procedures such as wound dressing and removal of surgical sutures.

The minister stated that the appointment system has been implemented in 673 Klinik Kesihatan through phases, with plans to eventually expand into even more services in the future. The system apparently helps clinics organise their schedule based on each facility’s capacity to avoid overcrowding and appointments for 2023 dates can be made through the app starting today.

While you can only make one appointment at a time, you can also cancel and reschedule any ongoing appointments through the app instead of having to call the facility. MySejahtera also has a feature called Automated Reminder which will send notifications to users to remind them of their appointment.

Up until the MySejahtera expansion, appointments for Klinik Kesihatan services were made through Qmed Asia. While the Health Minister’s press release did not make any mention of Qmed, trying to book a slot on its website will now lead to a pop-up that tells you to make the appointment through MySejahtera.

The MySejahtera app started out as Malaysia’s go-to COVID-19 app during the pandemic but ever since the country started to transition to an endemic phase, the Health Ministry started adding more health features to the app with the goal of pivoting it into a public health platform with a nationwide user base.