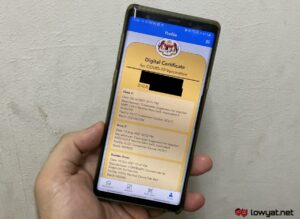 The European Union (EU) now officially recognises the digital certificate issued by the national contact tracing app MySejahtera as part of its Digital COVID Certificate trust network. This was announced earlier by EU ambassador to Malaysia Michalis Rokas on Twitter, who also said that the decision is made effective starting today on 4 April 2022.

MySejahtera’s recognition by the EU arrives not long after Malaysia’s transition to the endemic phase last week on 1 April which, at the same time, saw the country opening its borders for both local and foreign travellers. Additionally, this would also explain why Apple now recognises the QR code for the MySejahtera digital certificate via its Apple Health and Apple Wallet apps after the recent iOS 15.4 update.

“Malaysia shall be connected to the EU Digital COVID Certificate trust framework established by Regulation (EU) 2021/953,” read a graphic attached to Rokas’ tweet. For the uninitiated, EUR-Lex notes that aforementioned regulation is a “a framework for the issuance, verification and acceptance of interoperable COVID-19 vaccination, test and recovery certificates to facilitate free movement during the Covid-19 pandemic”.

Some great news: The EU

In the same tweet, the ambassador also referred to the decision as “a booster for business and tourism.” Meanwhile, health minister Khairy Jamaluddin responded to the post by tweeting “Reconnecting Malaysia and the EU.”