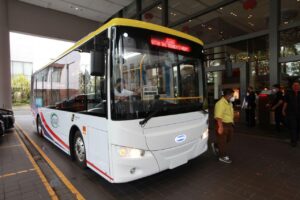 The public transportation system in Johor Bahru and the surrounding areas will receive a revamp soon through the implementation of myBAS Johor Bahru service. It is being funded by the federal government to the tune of RM150 million over three years via the Stage Bus Service Transformation Programme (SBST).

The bus service is expected to begin in March and will have a frequency of 20 to 30 minutes during peak hours while off-peak hours will see a frequency of between 30 and 60 minutes. Involving 128 buses across the state, myBAS JB will serve 19 routes in five different corridors including Kota Tinggi, Masai, Kulai, Gelang Patah, and Pontian.

Moreover, myBAS JB will also trial eight electric buses that will serve two routes in the city centre. According to Transport Minister Ir. Dr Wee Ka Siong, this is the first time that electric buses are being used as part of SBST.

The minister also said myBAS JB will have both cash and cashless payment options although he did not give out any details regarding the bus fare. With a total distance of 1,052km, the service is expected to benefit 6.4 million passengers annually.