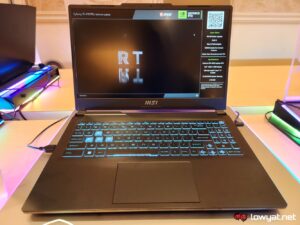 One laptop series MSI was a little eager to introduce to the world this year at CES 2023 is the Cyborg Series and out of this series is the Cyborg 15. The manufacturer defines the series as its new affordable and entry-level gaming lineup, but one powered by the latest and up-to-date hardware, albeit with a catch. We’ll get to that later.

Let’s start off with the Cyborg 15’s unofficial starting price: US$999 (~RM4390). At that price, you’re opening the gates to a laptop with a 15.6-inch Full HD+ display, with an aspect ratio of 16:10. Additionally, the panel also has a 144Hz refresh rate, so you’ll have no quarrel there, if and when a user wants to game in between breaks or tasks. And yes, it does support Wi-Fi 6E and more importantly, Intel’s Wi-Fi 6 Gig+.

Going off on a sidebar, the aesthetics of the Cyborg 15 are mildly interesting. There is a focus, if not emphasis on the use of plastic here, and it is presented in the form of translucent plastic. The bottom of the base is nearly see-through, and you can just about make out the components hiding underneath when you get close enough. At the surface, the keyboard’s keycaps also sport the same material, with AWSD and arrow keys being the primary receivers.

To help drive gaming and other digital professional needs on the Cyborg 15, the laptop is equipped with NVIDIA’s recently announced GeForce RTX 40 Series Mobile GPUs. Technically speaking, you have a choice of up to an RTX 4060, but the unit on display at the Taiwanese brand’s showroom was rocking an RTX 4050, which comes with 6GB GDDR6.

Other components that come with the Cyborg 15 include up to a 2TB storage expansion, as well as a 3-cell 53.5Whr battery to keep the laptop chugging along. Although, how long it will be able to keep the laptop off the wall will depend on the Intel CPU generation that MSI wishes to use.

And therein lies the rub – the catch we mentioned at the start – of the Cyborg 15. As with the majority of MSI’s refreshed laptop series, this is also an Intel-powered laptop. On paper, it is expected to run the latest 13th Gen Raptor Lake CPU, with up to a Core i7-13700H sitting on the throne. However, in order to make the laptop appealing and attractive from a price-to-performance viewpoint, certain markets will instead be receiving the unit fitted with a 12th Gen Core i7-12700H. After having a quick word with one of the MSI staff members present, we found out that Malaysia is expected to receive the laptop in the latter CPU configuration.

At the time of writing, we do not have local availability or pricing for the Cyborg 15.

The post MSI’s Cyborg 15 Is A Sub US$1000 Gaming Laptop With A GeForce RTX 40 Series GPU appeared first on Lowyat.NET.