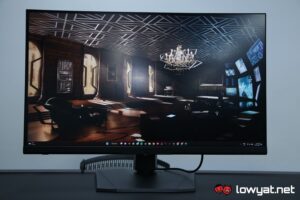 For RM5499, the Optix MPG321UR-QD – that honestly is both a handful and mouthful to type and say – is one of MSI’s top-of-the-line gaming monitors that, if the last two letters at the end of its designation haven’t clued you in yet, sports a panel made from Quantum Dot (QD) display. If you’re not familiar with the technology, it is Samsung’s proprietary display technology known for its high level of colour reproduction across the board, including Adobe RGB, DCI-P3, and REC.2020. As it is Samsung-made, it also means that you can expect colours on-screen to look bold and eye-popping. Just ask ASUS and Acer, two other brands that were the first to deploy the technology through their first 4K gaming monitors, back in 2018.

Other specifications of the Optix MPG321UR-QD include its 32-inch display real estate, which honestly is a real treat, especially for someone such as myself that has been stuck with the 27-inch form factor for the longest time. Additionally, this is one of the few gaming monitors I have tested that actually uses a full-sized, solid plate as its base, instead of a three-legged stand to prop it up. In addition to being a 4K monitor, it also has a maximum refresh rate of 144Hz and a HDR 600 rating, the latter indicating that this monitor has a 600 nits peak brightness.

The Optix MPG321UR-QD is also an NVIDIA G-Sync Compatible monitor, instead of a full-sized G-Sync Ultimate module. Ports-wise, it comes with one DisplayPort 1.4 port, a USB-C port that can also be used as a DisplayPort 1.4 port, two HDMI 2.0b ports, and a healthy number of USB 3.2 Gen1 ports.

As I said, colour reproduction on the Optix MPG321UR-QD are accurate, as well as bold, punchy, and near true to life. Also, thanks to the Quantum Dot panel, blacks are…well, deeper and blacker, while the whites reproduced on this gaming monitor could nearly give Jotun a run for its money. Further, words look crisp and sharp, while images are clear, with their details distinguishable from every element within its boundaries.

On that note, I can also say that the Optix MPG321UR-QD’s panel doesn’t appear to suffer from issues such as bloom or even light bleeding from the edges. On another note, the in-display menu is simple to understand and easy to navigate.

The Optix MPG321UR-QD doesn’t seem to have sturdiest spine for a gaming monitor. To be precise, the panel has a tendency of jiggling, even under the slightest shake of my table. But that being said, it is not technically a hindrance or nuisance.

On an aesthetic level, the MPG321UR-QD isn’t exactly what I would describe as outspoken or experimental. Strictly speaking, it’s as if MSI made the conscious decision to tone it down on the RGB at the back, while also keeping branding to a minimum by just slapping its badge on one side and calling it a day. But again, beauty is in the eye of the beholder, so someone looking at it may think differently.

We’ve certainly come a long way since the advent of high refresh rate 4K gaming monitors. At RM5499, the MSI Optix MG321UR-QD is a gaming monitor I can get behind. Yes,that still isn’t a cheap price and I can certainly hear some of you saying that it costs nearly as much as a brand new NVIDIA GeForce RTX 4080, but my counter argument would that if you could afford a card such as the RTX 4080, then it is very likely that you would be able to add this gaming monitor to your cart.

In any case, the MPG 321UR-QD is a premium 4K gaming monitor I can confidently recommend, especially if you’re looking for something with a simple and clean design, both around the front and back.