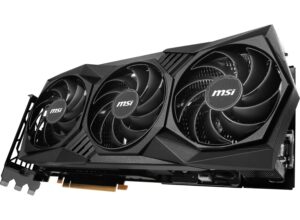 Like all other major hardware manufacturers, MSI recently launched its own series of custom-cooled configurations of NVIDIA’s newly launched GeForce RTX 3090 Ti, which includes the Gaming Trio and SUPRIM series. However, the only model that is currently available in Malaysia is the Black Trio model.

Like all RTX 3090 Ti models, MSI’s Black Trio model is based off of the 8nm Ampere architecture, has 24GB GDDR6X graphics memory running at a frequency of 21Gbps, 10752 CUDA cores, 1TB/s of bandwidth, and a 384-bit memory bus. Because of the extra “oomph” in its graphical prowess, the card has a 450W TDP, up from the 350W required by the original RTX 3090. To that end, the card also features the new 16-pin Microfit MOLEX PCIe port. As for its boost clock, the card run at 1860MHz, which is the default boost speeds of the RTX 3090 Ti.

Other component details include MSI’s TORX 4.0 fans, of which Black Trio is equipped with three of them. These fans are also part of the card’s TRI FROZR 2 cooling system and also sports a metal blackplate for added rigidity. Ports-wise, the card has three DisplayPort 1.4a ports and one HDMI 2.1 port.

As mentioned earlier, the MSI Black Trio GeForce RTX 3090 Ti is already available for purchase at an SRP of RM9700, but that is truly pending its availability. At the time of writing, all units of the cards were already sold out, and MSI tells us that there’s no indication when the next batch will be available. On top of that, the brand also wasn’t able to tell us when other variations of the card would be available in Malaysia.