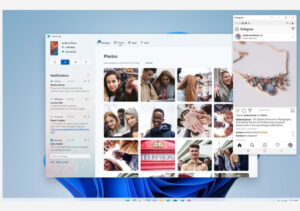 Microsoft has revealed that its Android-to-PC mirroring app on Windows has been updated with added features, a refreshed look, and also a new name. The app – formerly known as ‘Your Phone‘ – has been rebranded as ‘Phone Link’, which honestly sounds better and makes more sense.

The upgraded interface for Phone Link now matches the design aesthetic of Windows 11, along with the option that allows users to customise its colour palette. Aside from the facelift, the app also comes with several quality-of-life additions, such as real-time phone notifications which now appear on its left sidebar. Users can also reply to messages here, saving them the time from launching apps such as WhatsApp in a new window.

Additionally, this update also saw Microsoft adding support for certain devices from Honor to Phone Link, as part of a newly inked deal between the two brands. Through this partnership, products including the Honor Magic V, Magic4, Magic4 Pro, Magic4 Ultimate and the Magic3 series can now access the Windows app’s more advanced features which were previously exclusive to certain Samsung phones and Microsoft’s own Surface Duo smartphones.

Last but not least, the company has also made it much easier to pair Android phones to Windows 11. Prior to this, users were required to manually download Phone Link’s companion app (now known as Link to Windows) via Microsoft’s website. Now, all that is required is to scan an on-screen QR code that is prompted when you wish to pair your device.

Microsoft says that the new Phone Link update is available now. However, seeing that the changes have not been reflected on our own Windows devices, it is possible that it might not be available to every user just yet.