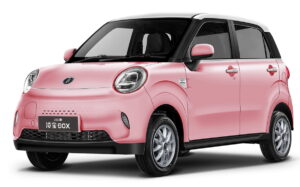 EP Manufacturing Berhad (EPMB) through its subsidiary EP 4Wheeler (EP4W) has signed a deal with Hubei Dongfeng Power Auto Trade and Xiamen Tsingyan Hylong Motor Technology to become the exclusive distributor of Lingbox automotive products in Malaysia and Indonesia. In addition to that, the company has also secured the rights to assemble a right-hand-drive version of these EVs.

On top of that, the deal also allows EP4W to implement any adaptive improvements or custom upgrades to them if deemed necessary. It also allows the company to brand these locally assembled EVs as Lingbox Auto, Qingyan Hailong, or EP4W’s own brand names.

The 5-year deal will be officially in place from 1 January 2023 onwards although the agreement did not mention when exactly Lingbox vehicles will be rolled out into the market. The brand currently has several small-sized EVs under its wings including the Lingbao Box.

Equipped with a 30kW 95Nm motor, the base variant of Lingbao Box which is called the Li Qingzhao version features a 14.72kWh lithium iron phosphate (LFP) battery and a rather puny maximum travel distance of 140km. The mid-range Cai Wenji variant features the same motor but was equipped with a larger capacity LFP battery at 19.13 which allows it to travel slightly further at up to 205km.

On the other hand, the high-end Pro Zhou Wenjun edition not only has a more powerful 35kW 125Nm motor but also features a 31.5kWh ternary lithium battery that enables it to go as far as 320km.

When it comes to charging time, only the Zhou Wenjun edition can support DC fast charging which cuts the charging duration to around 1.2 hours as opposed to 12 hours with AC charging. The two lower-end variants have to settle for a charging time of between 8 to 10 hours since they can only support AC charging.

The new Lingbox Auto distributorship and assembly arrangement is EPMB’s third major EV-related deal for this year which already has existing cooperation with the Saean Group to produce A-segment 4-seater 5-door electric vehicles. While the deal with Saean is still in the early stages and not yet legally binding, ultimately both companies are aiming to have an annual production of 20,000 units by early 2026 with 5,000 of them will be released into the domestic market and the rest will be heading to other Southeast Asia countries.

Meanwhile, EPMB is also gearing up to roll out the Blueshark electric motorcycle in Malaysia through another subsidiary, EP Blueshark. The company has recently deployed Blueshark Battery Swapping Stations at four selected Petronas locations ahead of the public launch for the Blueshark R1 which is rumoured to take place sometime next month.

The post Lingbox Mini EVs Are Coming To Malaysia appeared first on Lowyat.NET.