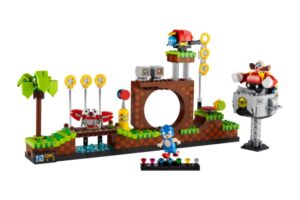 Late last year, LEGO has unveiled the Sonic The Hedgehog set which was originally conceived through the LEGO Ideas platform by a fan from UK, Viv Grannell. Unlike the interactive Super Mario collection, the 1,125-pieces Sonic set was designed as a display piece for adult LEGO fans and revolves around the iconic Green Hill Zone from the first Sonic The Hedgehog game that was released in 1991 for Sega Genesis.

At the time it was announced, LEGO didn’t reveal the release date and pricing of the Sonic set in Malaysia. Weeks have passed since then but we have recently revisited the set once again and after scouring through LEGO’s website, only then we have learned that it is already available in our market.

In fact, it was already here since mid-January based on the social media postings by Box of Bricks and BrickMagic (ALJ Distributors) which are two Malaysian-based LEGO Certified Store operators. Aside from that, our search also showed that the Sonic set can be obtained from LEGOLAND Malaysia’s online store and its Shopee equivalent.

Depending on where you choose to purchase it, the Sonic set is priced between RM329 to RM329.90. Some LEGO resellers may sell it with a different price tag, so make sure you check out the fine details and the seller’s reputation first if you decide to obtain the set via that route.

The post LEGO Ideas Sonic The Hedgehog Set Readily Available In Malaysia For Around RM330 appeared first on Lowyat.NET.