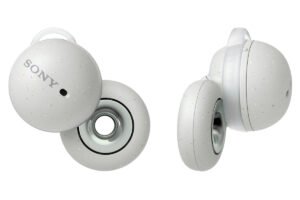 It has been a while since we’ve seen anything extraordinary in the earbuds market; with the last unique-looking product being the Samsung Galaxy Buds Live back in 2020, which features an unconventional bean-like design. Now, it appears that Japanese tech giant Sony may finally pick up where the Korean tech giant had left off.

According to a recent leak by TechInsider, the company could be launching a new pair of earbuds which features a very uncommon design that will raise some eyebrows. Allegedly known as the Sony WF-900 Linkbuds, it sports a donut-shaped earpiece that is attached to a dome-like main body. And similar to the Galaxy Buds Live, this particular product is seemingly designed to fit snugly onto a person’s ears and also lacks eartips.

What’s really interesting about this look is the aforementioned donut earpiece, which actually has a hole in the middle – meaning that external audio could still pass through while wearing the earbuds. If this leak is to be believed, it is certain that this design may have a purpose and Sony could have implemented some kind of next-gen active noise cancelling (ANC) feature that could filter out environmental noise.

That, or perhaps the WF-900 is developed with user awareness in mind – similar to non-conventional audio devices such as those by AfterShokz, which uses bone conduction to deliver audio. If so, this would raise even more questions related to the Linkbuds’ audio capabilities, as such products mostly focus on function rather than sound quality. Keep in mind that these are just speculations from our end, and the actual product may turn out different altogether.

Other than that, there seems to be a single button only on the left earbud. It is not certain if the device would feature touch-based controls for managing playback, calls, and so on. The leak also revealed that the buds will be offered in either white or black colour options, and comes with a matching clamshell charging case.

TechInsider did not share any details regarding the specifications, pricing, availability, or expected launch date for WF-900 Linkbuds. That being said, hopefully more information regarding the allegedly upcoming earbuds will be announced by Sony in the coming weeks or even months. We’ll be sure to keep you posted when the time comes.