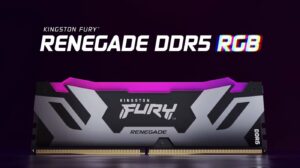 Kingston officially pulled back the curtain on its latest addition to its Fury memory lineup. As of today, the series can now add the high-performance Renegade DDR5 lineup to its portfolio.

Like the majority of memory kits under the Fury line, the new Fury Renegade DDR5 series comes in both RGB and non-RGB flavours. More importantly, for those looking into getting an RGB-capable pair of sticks, you will be able to customise its lighting effects and how it looks through the Kingston Fury CTRL 3 software, where consumers can choose between 16 smooth, customisable RGB effects. Oh, and they are also kept in sync with whatever actions you’re performing in-game through the brand’s Infrared Sync Technology.

As with all DDR5 memory kits, Kingston’s Fury Renegade DDR5 sticks feature an on-die ECC, enabling it to deliver more reliable DRAM component, as well as balance the power as and when needed, through an onboard PMIC. Also, because the only chipset able to use the DDR5 memory standard is Intel’s 12th generation processor and 600 series motherboards, they are also XMP 3.0 Certified and can support up to two customisable profiles that are tweaked to optimise timings, speeds, voltages, and saved directly on to the DIMM.

Performance-wise, the new Fury Renegade DDR5 RAM are available running at two frequencies: 6000MT/s and 6400MT/s. Regardless of memory speeds, both options have latencies of CL32 and voltage consumptions of 1.35V and 1.4V, respectively.

As for their capacities, Kingston’s Fury Renegade DDR5 RAM is available in single-stick kits of 16GB and 32GB in kits of 2. Beyond that, the brand’s product page isn’t specifying which memory modules its new high-performance memory kits are built on.

At the time of writing, Kingston did not specify availability or pricing for its new Fury Renegade DDR5 memory, but given the memory maker’s trend and habit, its launch could be happening sooner, rather than later.