The Kanto Yu6 speakers have been on the market for a while. In fact, if you search Google hard enough, you’ll find that they’ve actually been in existence as far back as 2017, meaning that they’re no spring chickens in the audiophile world. I’ll get straight into it. The Yu6 is a pair of speakers, equipped with Class D amplifiers that, in turn, allow them to pump out sound at 200W of peak power, with a frequency response between 50Hz and 20KHz.

Other specifications of the Yu6 include 1-inch Silk Dome Tweeters for each speaker and 5.25-inch Kevlar Drivers below each tweeter. 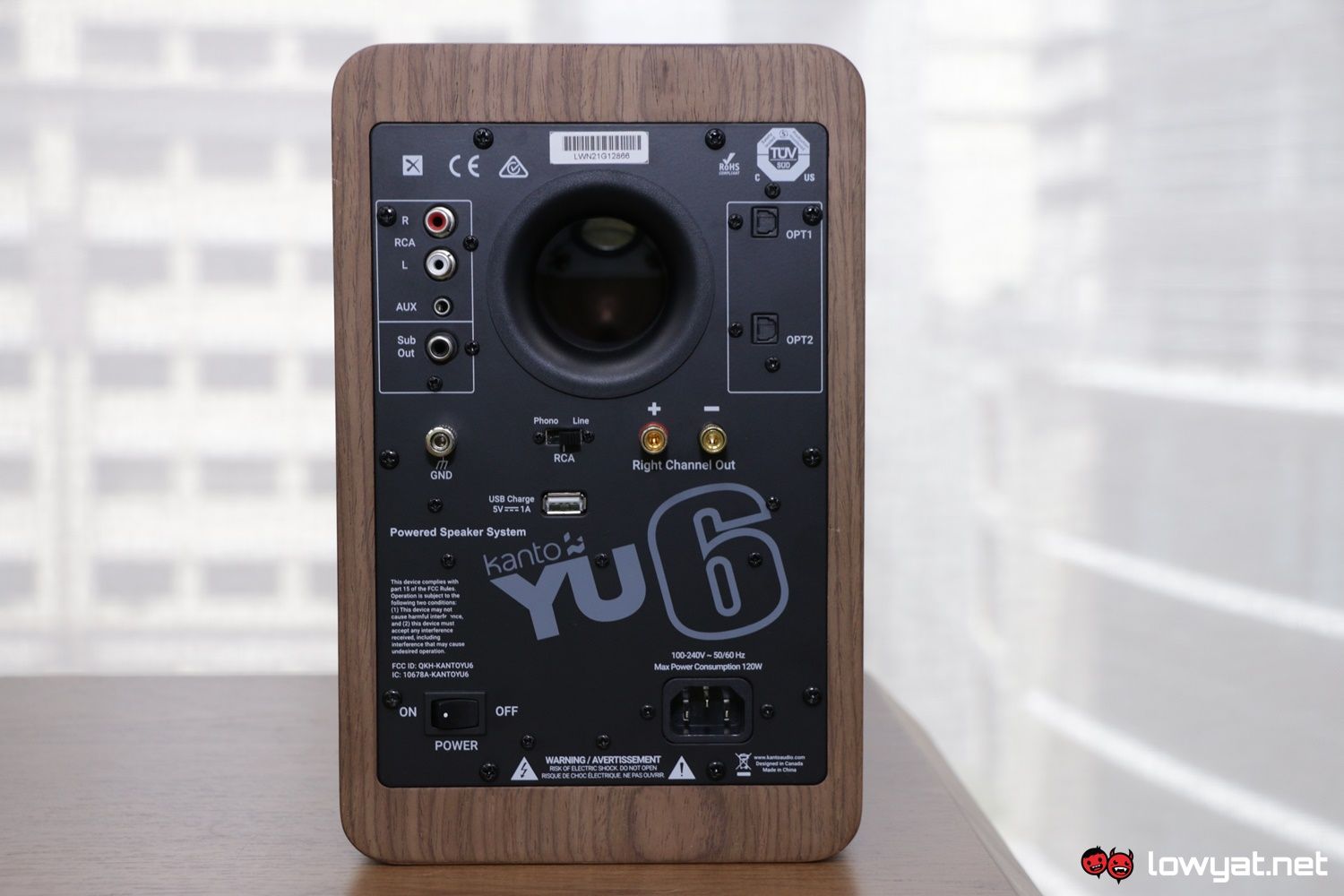 For connectivity around the back, the Yu6 has a 3.5mm auxiliary jack, an RCA with Phono Switch, to Optical input ports, and wireless support for Bluetooth 4.0 and Qualcomm aptX. For output, there is a port for an external subwoofer and a USB charging port that supports up to 5V, 1A.Oh, and it also comes with its own remote control.

On top of that, the Yu6 comes in a variety of skin colours; the review unit I have in my lab sports the Walnut skin. Compared to the Yu2 and as stand-alone speakers, the Yu6 definitely feels a little more “complete”, and that is also for fairly obvious reasons. I’ll start by addressing one of the more important elements of these speakers: the low pitch of these speakers. Once again, just being able to hear the whole range of pitches – from the highs to the lows – tells me that these speakers are definitely a step above or, in another way, in a class of their own.

Getting back to the Yu6’s performance, the output on both speakers is clear and sharp, with the highs and mids being more prominent, while the lows delivered through the 5.25-inch Kevlar drivers are clearly present in a support role.

This is evidenced by songs such as Nina Simone’s Feeling Good And Hozier’s Shrike, while pieces such as Priscilla Ahn’s Fine on the Outside and Florence and the Machine’s Never Let Me Go sound brightfully loud, despite the tone of both songs.

On another note, vocals are loud and equally as prominent with the highs and mids, but that element does sometimes take centre stage, almost to a point that it drowns out everything else. Case in point, songs by artists such as Madeleine Peyroux and Jill Barber really have their singing emphasised and pushed to the front. Like all of Kanto’s other speakers, the Yu6 is sold as a standalone product and retails at a rather hefty RM1950, meaning that the sub-woofer is an optional extra at RM1550. Honestly, I think it’s a pretty steep price to pay for a pair of speakers, but that is merely my personal opinion.

On another matter, the Yu6 are clearly not the kind of speakers I would want to place on my desktop, unlike the Yu2. I say this because, during testing, listening to them placed beside my PC monitor actually feels difficult and, to a varying degree, unsatisfying. Fact of the matter is, my listening experience with the Yu6 became a lot more pleasurable when there is a bit more space for them to bounce about.

But that is, in effect, my mistake: the setup of the Yu6 is on me and for that matter, I recommend having these speakers set up in a more open environment as part of a home entertainment system in the family lounge, right next to that big screen TV. In all honesty, there is little I have to say about the Kanto Yu6 and its capabilities, especially when taking into consideration its availability for more than half a decade. Rather than having it as your primary speakers on a desktop, though, the Yu6 are clearly more in line with the home entertainment ecosystem. At RM1950, it is certainly pricey, but again, you are paying for something capable of delivering a fairly rich audio experience with a fairly accurate sound staging too. Also, even if you were to buy a Sub8 as an optional extra, the bundle would still cost less than most complete home theatre systems on the current market.