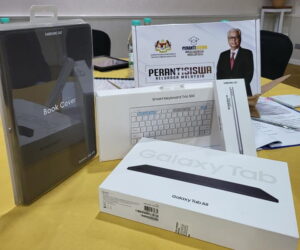 A total of 14 cases regarding the resale of tablets distributed under the PerantiSiswa initiative have been detected across Malaysia, Communications and Multimedia (K-KOM) minister Tan Sri Annuar Musa revealed yesterday. The issue was made viral on social media a day prior, where it is reported that alleged recipients of the programme have been selling their devices and included accessories online at lower prices from their current market value.

The entire PerantiSiswa package, which consists of a Samsung Galaxy Tab A8 and compatible accessories, were rolled out to eligible applicants starting last month as part of the initiative’s first phase of distribution. The initiative itself is intended to aid students who are in the B40 group by supplying necessary devices to help them in their studies in institutes of higher education. While initially introduced as a loaner device, the government had declared back in early September that recipients will no longer be required to return them at the end of their studies.

In regards to the recent incidents, Annuar said the act of reselling is irresponsible as it violates the personal use agreement that was signed by eligible applicants when receiving the devices. The Ministry of Domestic Trade and Consumer Affairs (KPDNHEP) has been instructed to conduct further monitoring of potential incidents.

Furthermore, Annuar claims that devices distributed under the PerantiSiswa initiative have the ability to “track” those who bought them, and some devices have been blocked from use. He further added that included in the tablets are specific applications that are able to determine its presence either at the university or other locations.

In the meantime, the minister said K-KOM is willing to study the implementation of a ‘buy back policy’ for PerantiSiswa devices, in the case where they are no longer required by recipients. “Maybe there is a suitable ‘buy back’ method after a year,” he said. “I will ask [the ministry] to study the method instead of selling the device at a cheap price.”