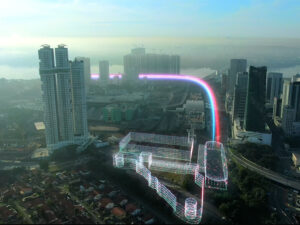 Johor Menteri Besar Hasni Mohammad has revealed that the state government is welcoming a proposal by a consortium to build a Light Rail Transit (LRT) project in its capital city, Johor Bahru. Hasni said that the introduction of an LRT system could also support the development of the Johor Bahru–Singapore Rapid Transit System (RTS Link).

Not much has been revealed about the proposal or the consortium behind it, but the state leader said that it will span through seven phases. The first phase will apparently be built along the Jalan Tun Razak RTS alignment, which would provide connectivity between the two lines. He added that the proposed LRT project will strengthen the city’s existing public transport infrastructure at Larkin Terminal.

Aside from Johor Bahru, Ipoh is also considering of erecting their own LRT system with 28 proposed stations, while Kota Kinabalu is exploring a Skytrain development. Meanwhile, Penang has been working on the Bayan Lepas LRT line for years, but development has been hampered due to controversies involving land reclamation.