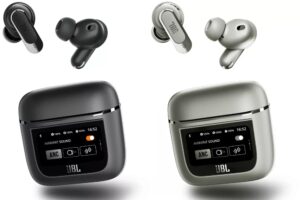 When it comes to making a sequel to a fairly good, if pricey, pair of TWS buds, the way to go would usually be to push sound quality even further. Or, if the previous iterations had build quality or fitting issues, then that would be something to work on. JBL though, has decided that what the Tour Pro 2 needs is a touchscreen on the charging case.

According to TechSpot, the JBL Tour Pro 2 has a 1.45-inch LED touchscreen display on the front of the charging case. The idea behind this is so that you get another method of simplified music navigation and toggling of features like ANC and ambient mode. This is in addition to very smartwatch-like features such as viewing messages and notifications, as well as a clock and battery indicator for the case and both buds.

On the surface, having a screen, nevermind a touch screen, on the charging case for TWS buds may sound like a good idea, judging from the features. But it doesn’t take very deep thoughts before it all falls apart, and these issues won’t be exclusive to the JBL Tour Pro 2. To start, having a screen means having another source of battery drain. Your mileage may vary as to if it’s worth it for being able to better tell the remaining charge in the case and each bud, but all of the features it provides are unnecessary.

You can already navigate music playback and turn on or off things like ANC using gesture controls. And you already have your smartphone, or if you’re so inclined, your smartwatch, to check messages and notifications with. And finally, having an additional touch screen means having another potential case of pocket dialling, or in this instance, accidental skipping of tracks.

But back to the buds themselves. The charging case of the JBL Tour Pro 2 looks reminiscent of the Tour Pro+ besides the additional screen, as well as looking less rounded around the corners. The buds themselves also look like they’ve gotten a slight redesign, now having a stem like the Live Pro+. It has 10mm drivers, connect using Bluetooth 5.3 and have a battery life rated at 10 hours. The case gives an additional 30 hours on top of that.

Though it’s being announced now, the JBL Tour Pro 2 will only be available in January 2023. In Europe, this will be priced at EUR249 (~RM1118). No word on local pricing and availability just yet.