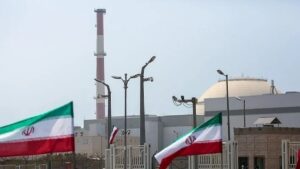 Last weekend, the Iranian government suffered a blow after a hacker group digitally broke into its Bushehr nuclear power plant and made off with a figurative ton of data. Even more humiliating for Iran? The hacker group in question wasn’t a foreign actor, but a domestic one.

The hacktivists, who go by the handle “Black Reward”, describe themselves as an anti-regime group, whom most likely existed for some time but probably became more active after the death of 22-year old Mahsa Amini, a female Iranian who was allegedly beaten to death by Iran’s religious police. This is, of course, simply speculation and as such, it would be wise not to treat this point anymore than that. Getting back on point, the hacker group reportedly accessed 324 email inboxes and swiped more than 100000 exchanges within.

Not long after, the Black Reward hacker group publicly shared all the stolen emails, totalling 50GB, on the messaging app, Telegram. However, the collective did warn that whoever wanted to download and view the files should apply some form of precautionary security, as the wad of digital mail contains a lot of spam, as well as phishing message with some form of malicious attachments.

The Black Reward hacker group also said that it had discovered private conversations between the Bushehr power plant and the International Atomic Energy Agency (IAEA), contracts and agreements with both domestic and foreign partners, construction, logistics, and strategic plans, and visas and travel documentation that belonged to both Iranian and Russian specialists. Who are working in the power plant.

At the time of writing, the Atomic Energy Organisation of Iran responded to the data breach, saying that no valuable data was stolen by the Black Reward hacker group, although this sounds more like a boilerplate answer and the agency is merely putting on a  brave face.