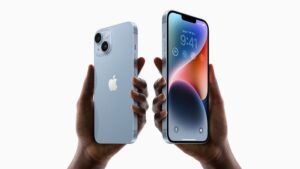 Every year, rumours and leaks regarding upcoming iPhone generations abound, and this year is no different. But all of that can come to and end, at least for the iPhone 14 generation, as Apple has finally unveiled this year’s family of phones.

For the two base models, there are the iPhone 14 and iPhone 14 Plus. As the name suggests, the main difference between the two is the screen size, with their measurements being 6.1 inches across and 6.7 inches, respectively. Though as a result of the larger size, it also boasts a better battery life, which Apple claims is the best it has ever been for iPhones. No exact numbers were provided though.

But beyond those differences, the two base model iPhone 14 look to be identical. Both are sporting the now familiar A15 Bionic chipset, which was present in last year’s models. Both also feature a 12MP f/1.5 main camera, which the company claims now features a larger sensor with larger, 1.9μm pixels, as well as the sensor-shift image stabilisation tech. This is paired with another wide angle shooter of unspecified resolution at the back.

The front camera is also a 12MP shooter, but with a f/1.9 aperture. New to iPhones though is autofocus for this front-facing shooter. Nothing really groundbreaking here.

Where things get a little more interesting though is the Photonic Engine that come with the iPhone 14 and the Plus model. This makes use of Apple’s Deep Fusion neural image processing. With an added tweak, Deep Fusion is applied earlier in the process, on uncompressed images. This basically improves photos by retaining more detail and brighter colours, as well as improving low light performance. The best part is that this benefits all three cameras on the iPhone 14. On videos, Apple is giving the iPhones what it calls Action mode which is a juiced up stabilisation tech.

The post iPhone 14, iPhone 14 Plus Starts From RM4199 In Malaysia appeared first on Lowyat.NET.