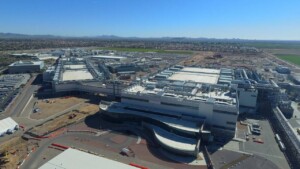 Intel is set to receive a massive US$7.3 billion (~RM 32.1 billion) in subsidies from the German government, over its plans to open up a new, giant chip manufacturing plant within the country.

Plans to subsidise Intel and its planned fab foundry in the city of Magdeburg was made public by a city representative in the German Bundestag. The subsidised amount reportedly amounts to approximately 40% of the chipmaker’s cost to build the new plant.

One reason behind the EU member nation’s decision to offer Intel such lucrative benefits would also benefit the country in the long-run: by helping the chipmaker establish a plant within its borders, Germany along with other EU member states would be able to reduce their dependencies on imported chips that it has been doing for so long now.

Adding on to that enormous piece of good news, Intel also won’t have to worry about competition from one of its biggest rivals, TSMC, as the latter announced that it wouldn’t be opening up shop within the EU. The Taiwanese semiconductor maker says that its decision was influenced by the fact that it has “relatively few customers” within Europe and as such, opening a factory within the EU wouldn’t be beneficial in the long-run, at least on a financial level. For that matter, not building a plant in the EU would not be to the detriment of TSMC, given that it is already opening up new factories in the US and its native Taiwan.

Getting back to Intel, the chipmaker is reportedly already on track, with the construction of the new plant set to begin sometime within the first half of 2023. Upon completion and barring any complications, the new plant should generate around 3000 permanent jobs within the region, while prepping the plant for production of more advance process nodes is expected to begin sometime in 2027.

(Source: FreiePresse via The Register, Techspot)

The post Intel To Get US$7.3 Billion Subsidy From Germany Over New Plant appeared first on Lowyat.NET.