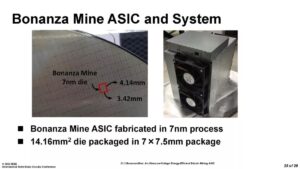 Remember back in January, when Intel said that it had plans on entering the cryptocurrency mining market? Well, the chipmaker recently broke its silence on the subject and decided to share more details about its miner-centric chip.

As a quick primer, Intel’s cryptomining chip currently goes by the codename Bonanza Mine and based on what it shared at ISSCC 2022, the chip comprises 300 units of the 7nm power-efficient chip, melded together to create a massive, enormous ASIC, capable of delivering up to 40THash/s of Bitcoin mining performance. The catch? In order for it to work, the system that will run it will need to sustain 3600W of power.

Intel also seemingly confirmed that it already has several large customers already in line, ready to purchase the 2nd generation chip that powers the Bonanza Mine, BMZ2. Getting back to the current Bonanza Mine ASICs, though, the ones that Intel shared about during the ISSCC 2022 are based on its 1st generation Bonanza MIne chips, the BMZ1. As per Tom’s Hardware, each chip has a die that measures in at 4.14 x 3.42mm and are based on TSMC’s 7nm die lithography.

Breaking down the specifications even further, each Bonanza Mine ASIC has 258 mining engines, capable of operating between 1.35GHz and 1.6GHz at 75°C, while consuming an average of 7.5W per piece. In total, we’re looking at each mining engine mining as much as 137GHash/s.

If you’re interested about learning a little bit more about how Intel’s Bonanza Mine works, you can follow the link we’ve included in the source.