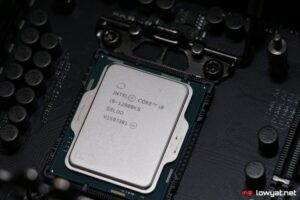 Back in April, Intel introduced the Core i9-12900KS, which is essentially the souped-up version of its 12900K, with the ability to run two of its P-Cores at speeds in excess of 5.3GHz. In this review, we’re going to see just how much of a performance jump we’re looking at, as well as determine whether or not it is worth Intel’s asking price.

On paper, the 12900KS isn’t all that different from the 12900K. It’s still based on the Alder Lake Intel 7 process, which is basically the chipmaker’s own name for its 10nm die lithography. It retains the same 30MB L3 Cache, even the same number of cores and threads. Specifically, it’s the same 16-cores, 24-threads layout, comprising eight Golden Cove cores (P-Cores) and eight Gracemont cores (E-Cores).

Like previous reviews, I will be running the 12900KS out of the box, with no overclocking conducted on it.

In the synthetic benchmark portion of the review, the 12900KS does show that it is a force to be reckoned with, but it’s not a consistent force. In 3DMark, particularly, the processor leads the charge in the Time Spy Extreme CPU test and Fire Strike Physics segment, but for whatever reason, it seems to falter behind the standard 12900K, albeit by a very small margin. In fact, the only time the 12900KS actually pulls ahead of the other three CPUs on the graphs is in PCMark 10.

At the gaming end of the spectrum, it’s clear that the 12900KS is clearly working hard to stay ahead of the competition, although I will say the quantifiable metrics do feel a little low. Even with two of its P-Cores running at a top speed of 5.5GHz, the gains obtained with the 12900KS feels…lacking, to put it mildly. In titles such as Control and Doom Eternal, the CPU definitely helps the titles churn out more frames: throughout the span of products that I have reviewed, this is probably the second time I’ve managed to get Doom Eternal to run at an average framerate of 500 fps at Full HD.

Beyond that, the 12900KS appears to be in a “Apples to apples” scenario with the other titles. That also applies to other titles that aren’t listed on the graphs, such as Cyberpunk 2077 and Borderlands 3.

Earlier in this review, I mentioned trade-offs to the 12900KS’ ability to run at 5.5GHz on two cores, and those trade-offs manifest themselves as the power consumption and temperature and boy, are they high. I’ll start with the power consumption: despite having an increased TDP of 150W – the original 12900K had a TDP of 125W – the 12900KS was pulling far more than that. At peak load, I’m seeing the CPU hitting 280W, although I should point out that this seemed to be limited to the more CPU intensive programs and, to a certain extent, games.

Then there is the operating temperature of the 12900KS. Again, I’m not overclocking the CPU, but even then, and because of the two cores that are designed to hit 5.5GHz, the increased performance causes the CPU to hit the 100°C mark, and then some. It’s both a surprising and absurd revelation but as it was with the issue of its power consumption, this problem only ever manifested itself whenever it was tasked with running component-specific programs and apps. Having said that, even gaming on non-CPU intensive titles still saw it holding at 83°C on average: that’s still significantly higher than the average peak operating temperature of the other three processors.

Unlike most flagship CPUs that I’ve reviewed, there is a very stark difference with Intel’s Core i9-12900KS and the rest of its Alder Lake desktop offerings. When the latter series finally arrived on store shelves, it signalled Intel’s return to form: the company had finally broken past its own 14nm limitations and was once more, a force capable of going up against AMD’s dominating presence, even if that is soon to be overshadowed by the Red Team’s imminent touchdown of its next-generation Ryzen 7000 series.

With the 12900KS, it feels as if Intel actually made this CPU not just for enthusiasts and extreme overclockers, but also as a form of posturing, to show both the world and its rival that they’re still capable of holding on to the title belt. Yes, the CPU is definitely a heavy-hitter and clearly overpowers AMD’s own top-of-the-line Rzyen 9 5950X in some scenarios. But when it comes to gaming, the extra frames it manages to churn out over its siblings and rivals are not what I would classify as groundbreaking.

There are some other caveats that go along with the 12900KS. Firstly, it’s still not available to the wider masses, due in part to the chip shortage and based on what some retailers are telling me, they’re not being given a local availability date. The second issue is pricing: On the official product page, Intel says that the recommended SRP for the 12900KS is between US$739 (~RM3246) and US$749 (~RM3290), meaning that it could potentially cost between RM800 and RM1000 more than the Core i9-12900K, when it finally reaches our shores.