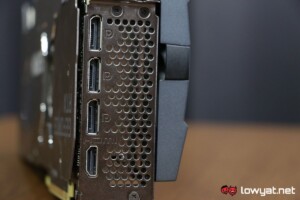 A recent discovery by Phoronix is suggesting that Intel’s upcoming ARC Alchemist’s DG2 GPUs may be capable of supporting up to five displays simultaneously. Supposedly, it was the Intel i915 graphics driver, an internal codename used for the Alchemist family of GPUs, that received an update.

At the time of writing, the i915 kernel patch lacks any information as to how it will support five displays at a time. At most, the screenshots found show that the fifth display output is labelled as “TC1”, suggesting that the port is intended to be a USB-C output port and more specifically, an alternative to the DisplayPort.

As it stands, desktop gaming graphics cards from neither AMD nor NVIDIA are able to support more than four displays at any given time. However, Vendors and AiB partners of both GPU brands, such as Gigabyte, have tried in the past to include more than four display output ports to their cards.

Having said that, it is possible that the fifth display option will only be made available for ALchemist cards that are released for the workstation series cards, especially considering that recent rumours have suggested that Intel is intending to release a workstation series of Alchemist graphics cards.