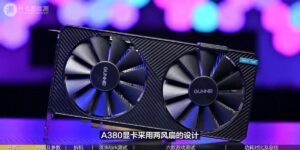 Last week, Intel officially pulled the curtains back from the ARC A380, its entry-level graphics card in the lineup and at this point, its first desktop graphics card to enter the market. Today, Intel’s embargo on all reviews for the card lifted and like clockwork, benchmark results of the card’s performance have reached the internet, and it actually not quite what we expected.

The performance metrics of the A380 were first posted by the China-based hardware reviewer, Shenmedounengce, on the Chinese video platform, Bilibili. The card they used seems to have been provided by Gunnir, who is one of Intel’s AIB partners and, from the looks of it, a China-exclusive brand. For comparison sake, Shenmedounengce benched the card against the current entry-level cards from both AMD and NVIDIA: the Radeon RX 6400 and GeForce RTX 3050. To benchmark the card, the reviewer ran some of the standard programs but shared the scores obtained from UL’s 3DMark Port Royal and Time Spy test.

As a quick recap on the specs of the A380, the card is built using an ACM-G11 GPU, has eight Xe-cores, 6GB GDDR6 graphics memory, running across a 96-bit bus. In addition, the card has a boost clock of 2.45GHz while its memory speed is confined to 15.5Gbps, a minor detail that Intel very quietly changed, despite the fact that it is technically using 16 Gbps modules made by Samsung.

The end results for the A380 that were obtained at the end of the synthetic tests shows Intel desktop GPU somewhat pulling ahead of the 6400, albeit by a very small margin. That said, the RTX 3050 was absolutely blazing ahead of the card, leaving it in its dust.

When it came to gaming, though, that’s where the A380 began singing a different tune altogether. Across the board, the Alchemist-based GPU proved to be nowhere as competitive as its rivals, performing at 24% slower than the RTX 3050 in a worst case scenario, and approximately 7% slower at best. To pour more salt on to the wounds, these scores were obtained testing the A380 at just Full HD resolution. On a side note, that list of games include a mix of Esports and AAA titles, such as League of Legends, PUBG, Tomb Raider, Forza Horizon 5, and Red Dead Redemption II.

Unfortunately, we can’t embed the video here, but we’ve provided the link in the source below, so you can watch it if you want.

The post Intel ARC A380 Graphics Card Benchmark Results Are Out appeared first on Lowyat.NET.