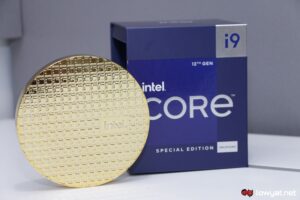 Intel appears to have made an “oopsie” by briefly divulging a short list containing the names of three of its upcoming 13th generation Raptor Lake CPUs on its website. Specifically, it listed down three CPUs, each belonging to a particular SKU.

The information was first spotted by prominent leakster 188号 (@momomo_us), who managed to capture a screenshot of the Raptor Lake posting, before it was taken down by Intel not long after. The list was basically Intel’s way of comparing three of its current 12th generation Alder Lake desktop CPUs with their next-generation counterparts, complete with their make and model numbers.

Adding on to that, all three Raptor Lake CPUs will have boost clocks and operating frequencies above 5GHz on a single-core, with the 13600K expected to peak 5.1GHz, the 13700K at 5.3GHz, and the 13900K at 5.4GHz. Mind you, the speeds being listed here are P-Core Turbo speeds, and not Turbo Boost Max (TBM) 3.0 or the chipmaker’s Thermal Velocity Boost (TVB).

On paper, the Raptor Lake 13900K is technically capable of reaching speeds of 5.8GHz once TVB is thrown into the equation. Meanwhile, the 13700K’s max frequency can go as high as 5.4GHz with TBM 3.0 but not TVB, while the 13600K’s listed boost speed remains the same.

Intel is expected to formally announce the launch of its 13th generation Raptor Lake CPUs on 27 September. It’s a move that is considered to be quite bold of the chipmaker, seeing how it is also the same day that AMD’s Ryzen 7000 series CPU lineup will officially be available.