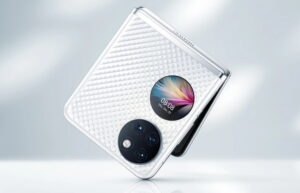 Huawei has officially unveiled its new foldable phone, the P50 Pocket. Joining the likes of Samsung and Motorola, the new model features a flip-style form factor instead of the inward-folding design on the company’s previous foldable phone, the Mate X2.

While P50 Pocket has actually been shown to the world earlier this month, it is only today that Huawei has revealed its specifications. Powered by the 4G variant of Qualcomm Snapdragon 888, the new foldable comes with a 6.9-inch 120Hz OLED main screen that also has a native resolution of 2790 x 1188.

At the same time, there is also a circular 1.04-inch 60Hz OLED cover screen with 340 x 340 resolution that is located next to the P50 Pocket’s primary camera module. Just like other flip-style foldable phones that are already in the market, the cover screen can be used as a viewfinder for the phone’s camera.

Users can also check out notifications, answer or reject calls, and control music playback on the screen. Not only that, it also supports a handful of widgets including a rather interesting feature called Sunscreen Detection which utilises P50 Pocket’s camera to determine whether users have applied enough sunscreen on their face.

Speaking about the camera, the module features a 40MP main camera together with 13MP ultra-wide and 32MP Ultra Spectrum cameras as well as 10-channel multi-spectrum sensor and laser autofocus system. There is also another 10.7MP camera located on the top centre part of the phone’s main screen.

Together with a side-mounted fingerprint sensor, the P50 Pocket has also been equipped with a 4000mAh battery that supports the 40W Huawei SuperCharge fast charger. The new foldable phone will be on sale in China later today with a price tag of CNY8,988 (~RM5,933) for the standard model which features 8GB RAM and 256GB internal storage.

As for the P50 Pocket Premium Edition that comes with 12GB of RAM, 512GB storage, and a textured body with a unique pattern specially created by Dutch fashion designer Iris van Herpen, it goes for CNY10,988 (~RM7,253). The new foldable device will be making its way to Malaysia soon although the exact launch date is still not yet known.