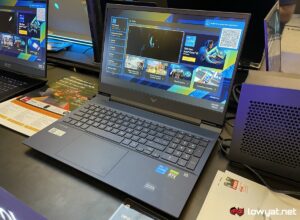 HP recently launched several new laptops with 12th Intel Core processors in Malaysia including the 2022 Spectre X360, Envy 16, and ZBook Studio G9. As it turns out, there are a few more models that the company may have forgotten to mention including its Omen and Victus gaming laptops.

Their arrivals were not accompanied by any official announcement from HP Malaysia though. Just like the Samsung Odyssey Neo G8 gaming monitor and Intel NUC 12 Extreme mini PC, we stumbled upon them by chance at the Malaysia IT Fair in Mid Valley Megamall last weekend.

Let’s start with the Victus 16 which carries a 16.1-inch Full HD (1920 x 1080) IPS display that also has an anti-glare coating, a refresh rate of 144Hz and a brightness level of 250 nits. According to the listing on HP Malaysia’s online store, it has also been equipped with 8GB DDR5-4800 RAM and 512GB PCIe NVMe M.2 solid state drive as standard alongside a 4-cell 70Wh battery.

As the HP booth at Malaysia IT Fair is handled by Thunder Match Technology (TMT), these laptops are also available directly from the retailer’s online store and physical outlets. That being said, do make sure to do your research and comparison beforehand as the pricing and stock availability between TMT and HP Malaysia stores are likely to be different from each other.