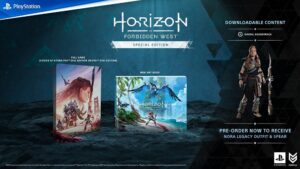 Horizon Forbidden West is set to release on 18 February. With that, Sony Interactive Entertainment has announced that pre-orders for the game opens tomorrow. And the company has shared details on pricing, and what you get for the different editions available.

Starting with the digital editions, they are priced at RM249 and RM299 for the PS4 and PS5 versions respectively. The Digital Deluxe Edition, which comes with both versions plus bonuses like the game’s digital soundtrack, art book and comic, is priced at RM339. Pre-order them and you’ll also get the Nora Legacy Outfit and Spear, a throwback to Aloy’s outfit from the original game.

For the physical copies of Horizon Forbidden West, it’s mostly the same on the price front. The standard version is priced at RM249 and RM299 for the PS4 and PS5, respectively. As for the deluxe editions, these are priced at RM299 and RM339, respectively.

The Collector’s Edition and Regalla Edition are only available for the PS5 version of the game. The former comes with a steelbook display case, a statue of both Aloy and a Tremortusk, two special outfits and weapons, as well as all the bonuses from the digital deluxe edition. All these come with a price of RM839. The Regalla Edition comes with all that, plus a replica Focus earpiece, a replica Sunwing and Clawstrider Strike Pieces, a physical canvas map, mini art book and two art print cards. And all that comes with a price of RM1099.

To sweeten the deal, if you pre-order any of the physical editions of the game, you also stand a chance to win one of two different bonus items.  These are a Horizon Forbidden West cap, or a 3D puzzle of the Tremortusk. This will only be valid at PlayStation authorised dealers and Sony Stores, the list of which you can check out from the link below.