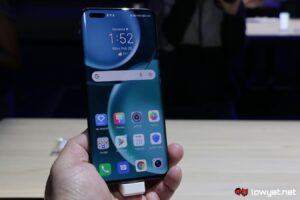 Here at MWC 2022, HONOR officially launched the Magic4 series, its latest lineup of flagship smartphones. While its predecessor had a total of three models for last year’s Magic3 series, this year’s follow-up simply comes in two flavours: the Magic4 Pro and Magic4.

Let’s start with the headliner of the show, the Magic4 Pro, and begin with the internal specifications of the phone. Off the bat, the phone is powered by Qualcomm’s latest Snapdragon 8 Gen 1 chipset, 8GB RAM, and up to 256GB of ultra-fast internal storage. Oddly enough, HONOR’s CEO, George Zhao, didn’t actually mention what the battery capacity of the Magic4 Pro was, but was eager to tell us all that the battery was one of the first in the industry to support 100W SuperCharge, both for wired and wireless charging. To put it in another way, charging the Magic4 Pro via its proprietary charging accessories for 15 minutes would restore 50% of the battery’s capacity. On another note, the Magic4 Pro also houses an ICC chip, along with dual TEE Security OS.

Then there’s the Magic4 Pro’s LTPO display. Spec-wise, it measures at 6.81-inches and is a Full HD+ OLED Panel. Additionally, it also has a maximum refresh rate of 120Hz and supports HDR10+, giving it a maximum brightness of 1000 nits and the ability to produce 1.08 billion colours. Regarding the refresh rate, HONOR says that that is controlled by a feature called Motion-Sync. To put it in layman’s terms, the feature automatically adjusts the refresh rate based on the user’s scenario, all so that it can preserve and extend the phone’s battery life.

On top of that, HONOR also boasts that the display on the Magic4 Pro is the first to offer 1920Hz PWM dimming, a function that supposedly makes for a comfortable reading experience, especially for users who are used to reading documents on their smartphones over long periods of time. Oh, and before I forget, the entire Magic4 Pro IP68 rated, so it can take a little swim in a pool (not salt water) up to 1.5m deep and for a duration of 30 minutes.

Still on the subject of the display, its edges are curved on both sides, a design aesthetic that’s clearly a carry forward from other brands, such as Samsung and Huawei. Having said that, the borders on both sides definitely feel smooth and fleshed out, so much so that the phone actually sits very comfortably in my hands, with nary a point of discomfort. Lastly, the top-left corner of the display has a cutout for 12MP ultra-wide selfie camera and 3D Depth Camera, with the former sensor having a 100° field-of-view.

On that note, that last point brings us to another main feature of the Magic4 Pro: the main camera module behind it or as HONOR describes it, the “Eye of Muse”. To be honest, it’s one of the more interesting camera designs we’ve seen in a smartphone; despite the many sensors, only three of those cutouts are camera lenses. Those lenses comprise a 50MP wide, a 50MP ultra-wide, and a 64MP periscope telephoto camera. The other two are a dTOF sensor and flicker sensor.

What makes the setup interesting is that HONOR made the decision to position the periscope telephoto centre stage and position right in the middle of the ring. To that end, it is capable of 100x hybrid zoom and 3.5x Optical zoom. Feature-wise, the combinations of all those camera lenses and sensors are mean that the Magic4 Pro is more than capable of recording 4K video in 10-bit Log, and at a frame rate of 60fps.

HONOR also made mention of the non-Pro version of the Magic4, although we had some difficulty finding the phone to hold and play. In terms of hardware, the phone is nearly identical to the Magic4 Pro, save for a few differences in certain areas. For a start, the selfie camera cutout has been shifted towards the middle of the display and lacks a 3D depth camera. Further, the periscope telephoto camera in its main camera has been reduced from 64MP to 8MP, and only has a maximum hybrid zoom distance of 50x.

Further differences between the Magic4 Pro and Magic4 lies within the fast-charging. While the former supports up to 100W, the non-Pro variant of the phone only goes up to 66W. Beyond that, everything else seems to stay the same.

Both the Magic4 Pro and Magic4 are expected to be available sometime during the second quarter of this year, although HONOR did not provide a specific date. Price-wise, the Magic4 will retail from 899 Euros (~RM4238) for the 8GB+256GB model, while the Magic4 Pro model will start from 1099 Euros (~RM5180). At the time of writing, there is no local availability or pricing.