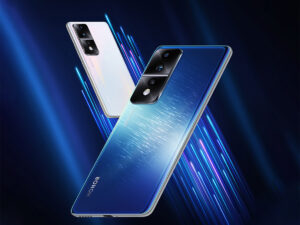 HONOR has announced yet another device in the 80 series, the 80 GT. The GT seems to be somewhere in the middle between the Pro and vanilla variants of the lineup, in terms of both specs and pricing.

The HONOR 80 GT sports a 120Hz 6.67-inch AMOLED display, the same size as the one found on the standard 80 but the latter uses an OLED panel instead. The GT display’s peak brightness is higher at 1,400 nits. Of course, it also comes with an under-display fingerprint sensor as well as stereo speakers and an IR sensor.

The upper-mid-range device runs on the Qualcomm Snapdragon 8 Plus Gen 1 SoC, giving it the same processing power as the Pro and putting it above the vanilla HONOR 80. The phone can be configured with either 12GB or 16GB of RAM while the storage can only go up to 256GB. For connectivity, it supports 5G, NFC, Wi-Fi 6, and Bluetooth 5.2.

The primary camera is the most significant downgrade if you’re choosing this over the other devices in the lineup, switching out the massive 160MP sensor for a 54MP one. The rectangular camera island also contains an 8MP ultrawide and a 2MP macro lens while the front display cutout houses a 16MP selfie shooter.

The battery capacity of the GT is the same as the Pro and standard models at 4,800mAh, coming with 66W wired charging but with no support for wireless charging. HONOR is advertising that the phone can charge from empty to 50% in just 15 minutes. It ships with MagicOS 7.0 based on Android 12 out of the box, which is disappointing given that Android 13 already officially launched a few months back.