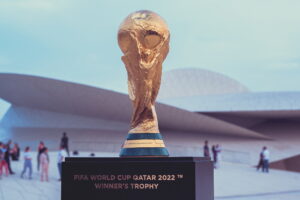 One of the world’s biggest sporting events in the world, the FIFA World Cup is making a return once again tonight. For the next month, 32 of the best football teams from all over the world will put their skills on the field across eight stadiums in Qatar.

All in all, the timing does not seem too bad for football fans in Malaysia since there are plenty of matches that will be taking place before 12:00 AM, in general. Not only that, you even have the option to watch them online for free without any backdoor hanky panky here in Malaysia which is what we going to discuss next.

Being the football-crazy country that is Malaysia, it is not exactly surprising to see that the federal government has provided some allocations to enable the national broadcaster, Radio Televisyen Malaysia (RTM) to show FIFA World Cup. As for the Qatar 2022 edition, it came at a cost of RM32.5 million.

Unlike the pay-TV provider Astro though (we will get to them in a bit), RTM will only broadcast 41 out of 64 matches from the event. Out of these matches, only 27 of them will be shown live but at the very least, both the opening and final matches are part of the list.

Comes at no cost to the public, RTM will be showing the FIFA World Cup 2022 matches through three channels including TV2, Okey, and Sukan RTM. If you looking to catch them online, all you need to do is just visit RTM’s streaming platform, RTMklik.

For mobile devices, look for the RTMKlik app from Google Play and Apple App Store. As for Huawei users, check out the RTM Mobile app at Huawei AppGallery.

Let’s say you are a hardcore football fan and watch to catch all 64 FIFA World Cup matches. Then, the only official route in Malaysia that you have is Astro.

That does not mean you need to have a TV and Astro box to watch them though as you can catch them fully online via the company’s freemium service, Sooka. Naturally, the FIFA World Cup Qatar 2022 is not part of its free content.

There are three pricing tiers that you can choose to catch the event through Sooka with one of them being the FIFA World Cup 2022 Pass which costs RM49.90. Alternatively, there is also an option to catch individual matches for RM9.90 per game.

Sooka also has other subscription option that includes access to FIFA World Cup Qatar 2022 such as the VIP+ Sports plan which is priced at RM41.90 per month. If you have selected LG and Samsung smart TVs as well as Sony and Sharp Android TVs, you can also catch the event by signing up for the VIP TV plan that is currently being offered at RM 62.90 per month instead of the usual RM 84.90 monthly fee until the end of World Cup.

To catch the event on the web, just head on to Sooka’s website right here. If you prefer to see it through a mobile device, then download Sooka’s app from Google Play or Apple App Store.

So, there you go, all the legal ways for you to catch the FIFA World Cup 2022 online in Malaysia. May the odds be in favour of the team that you support for this edition.

The post Here Is How To Watch FIFA World Cup Qatar Online In Malaysia appeared first on Lowyat.NET.