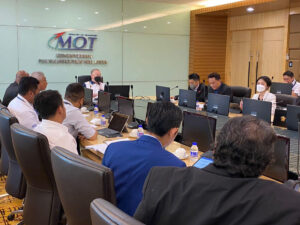 Transport minister Dr. Wee Ka Siong met with micro-mobility associations and vehicle operators at the Ministry of Transport (MOT) in Putrajaya yesterday for discussion regarding the government’s decision in April to ban these vehicles from public roads. In a statement posted on his official Facebook account, Wee noted that the ministry has received valuable feedback from the involved parties from the session that was held during the weekend.

The minister added that some suggestions and views are good and will be considered for a follow-up action. These include having micro-mobility vehicle associations and operators to be included in the MOT joint committee, as well as continuing the safety awareness campaign of these vehicles to the public.

In regards to the ban, Wee emphasised that the government has never banned the use of micro-mobility vehicles in Malaysia. Instead, they are only restricted from being used on roads (including pedestrian crossings) in order to preserve the safety of the public, he reiterated. Using them in safe and controlled environments, on the other hand, are allowed. The minister adds that the decision was made after taking into account the views and involvement of various stakeholders, including local authorities.

To recap, the imposed ban covers vehicles such as mopeds, personal mobility aids (motorised wheelchairs and such), as well as personal mobility devices including e-scooters, kick scooters, hoverboards and skateboards. Meanwhile, bicycles are not subjected to this law, though electric pedal-assisted bicycles can only be used on the road if they fulfilled the Malaysian Standard MS2514 Specification and that they are also throttle-less and equipped with permanent pedals.

Wee also revealed during the meeting that MOT will be detailing the guidelines on the use of micro-mobility vehicles in the country, which will be prepared by the town and country planning department (PLANMalaysia). The minister did not detail any specifics regarding the guidelines or when it will be released.