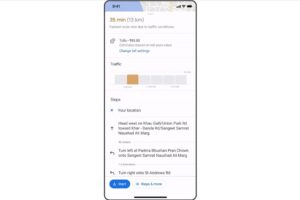 Last year, members of the Google Maps preview program were told that the navigation app will start showing toll estimates on travel routes. This is something that Waze, a navigation app that the internet search giant acquired, has implemented all the way back in 2019. Now, it looks like the company is finally starting the rollout of the estimated toll cost preview.

What this does should be self explanatory – if you’re driving to a destination using a route with tolls, you’ll get an estimate as to what you’ll need to pay when you cross the booth. This is especially useful for places where tolls fluctuate depending on traffic conditions, time of day, day of the week, or any other factor.

Google says that these toll estimates will first roll out for about 2000 toll roads in the US, India, Japan and Indonesia. More countries are coming soon, hopefully with Malaysia in that list.

Also as part of the update, Google Maps will start showing more details like traffic lights and stop signs to help identify exactly where you are. iOS users will also get the option to start navigation directly from an Apple Watch, rather than having to start the process via an iPhone.