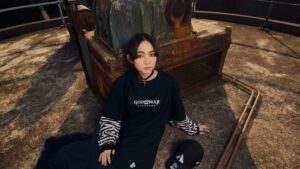 God of War Ragnarok will be officially available starting 9 November. The game is already getting a special edition DualSense controller to launch with it. But it looks like that’s not all the special edition tie-ins that the game is getting. Sony Interactive Entertainment has announced that there will be special edition apparel as well, in collaboration with #FR2 and New Era. More specifically, the former brand will have a limited edition T-shirt, while the latter will have baseball caps.

As PlayStation describes it, #FR2 is a Tokyo-based streetwear label, and the brand’s long sleeve T-shirt will have the God of War Ragnarok title printed in front. At the back, you’ll get key concept art depicting Kratos, Atreus and Freya, with the accompanying quote “Fate only binds you if you let it”. At certain corners, of the T-shirt, you’ll also see the brand’s logo, with a twist: the rabbit is now holding the Leviathan Axe.

For New Era, this brand has two limited edition baseball caps that tie in with the release of God of War Ragnarok. One shows the now common Bear and Wolf motif, signifying the two main characters. The other shows caricatures of Kratos and Atreus, both look to be wearing caps themselves.

As mentioned earlier, both of these God of War Ragnarok special edition apparel will be available on 9 November, but at different times. The #FR2 T-shirt will be available at midnight via the online Popcorn Store, which ships worldwide. For the baseball caps, the New Era online store will start taking orders starting 10AM.

Neither store has listed the products yet, so their prices are not yet known for now. That being said, you can take a look at the prices of the other products to get a general feel of what they would be like when they become available next week.