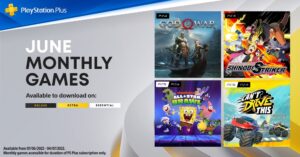 As we enter another month, we have another list of games that PS Plus subscribers can claim, regardless of their subscription tier. And it looks like June will be a pretty good month, because one single game on offer makes the subscription worth it all on its own.

And that game is God of War. Sure, it’s now available on PC, so it’s not as strong a draw of a game than when it was still a PS4 exclusive. But that doesn’t change the fact that it’s a great game, at least on the narrative front. Whether you enjoy the combat, or just the general gameplay, is another matter.

Also on the list of games PS Plus subscribers can claim for free is the Nickelodeon platform fighter, All-Star Brawl. It launched in a pretty bare-bones state, with characters not even being voiced. The developers have previously said that character voices will be added, but that has yet to happen. This is one of the two games that has both a PS4 and a PS5 version attached to it.

Here are your PlayStation Plus Monthly Games for June:

Available to download for Deluxe, Extra and Essential membership. pic.twitter.com/CIcIhyJGIt

The other game that comes in both PS4 and PS5 versions is Can’t Drive This. It’s a strange party racing game that’s both competitive and cooperative. Likely inspired by the 1994 movie Speed, driving too slow in this game causes your vehicle to explode. But the race track, as it were, is incomplete, and you’ll need someone to build the road in front of you.

Last on the list is Naruto to Boruto: Shinobi Striker. Probably the least inspiring one on the list, since there’s seemingly a new Naruto game every year.

At any rate, PS Plus subscribers will be able to download these games between 7 June and 4 July. If you’ve yet to claim the games for the month of May, now’s about as good a time as any to do so.

The post God Of War Headlines June’s Free Games For PS Plus appeared first on Lowyat.NET.