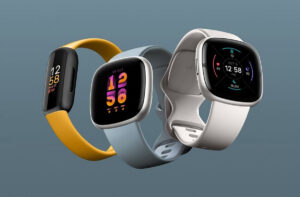 Fitbit today has officially launched its next generation Sense, Versa and Inspire wearables. In fact, all three models – namely the Sense 2, Versa 4 and Inspire 3 – arrived two years after the debut of its predecessors back in 2020. As expected, the trio come with a slew of upgraded hardware and features which we’ll go through in just a bit.

First off, we have the new Fitbit Sense 2 which sports a refreshed design and interface. It is equipped with the same health tracking capabilities (heart rate, sleep, menstrual health, ECG, Sp02, etc) of the original, with the inclusion of a new electrical sensor for measuring skin conductance (cEDA) for body response tracking. According to the company, it is the first continuous monitor of its kind to be worn on the wrist and designed to help with stress management.

Besides that, the smartwatch also comes with phone notifications, built-in voice assistant, onboard GPS, and a variety of exercise modes. Additionally, it also features over six days worth of battery life, fast charging, 50m water resistance, and includes small as well as large band sizes in the box.

Next up is the Fitbit Versa 4, which is thinner and lighter than last year’s model. Features-wise, it comes with pretty much all of the same tracking capabilities and built-in features as the Sense 2, sans the cEDA sensor. Similarly, the watch also features over six days of battery life, fast charging, 50m water resistance, as well as included small and large band sizes. Worry not though, as it does come with some new additions such as Google Maps turn by turn directions, Google Wallet, and 40 workout modes – the latter is double the previous total of its predecessor.

Lastly, we have the Inspire 3 fitness tracker. This time around, Fitbit has included a full colour touchscreen with an always-on function, Sp02 tracking, as well as high and low heart rate notifications. That being said, all of its predecessor’s health tracking and onboard features are carried over to the newer model, along with 50m water resistance and a battery life of up to 10 days. Unlike the two other models that launched together with it, however, the Inspire 3 does not come with any fast charging support.

All three Fitbit wearables are slated to arrive in Malaysia by mid-September onwards, with the earliest device to hit the market being the Inspire 3 fitness tracker. In terms of pricing, the Fitbit Sense 2 will retail for RM 1,248, while the Versa 4 and Inspire 3 are priced at RM 1,048 and RM 498 respectively. Pre-orders are now available via the brand’s local website.