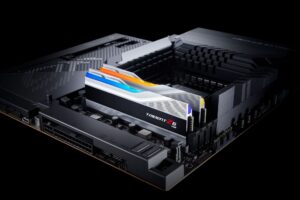 An extreme overclocker based in Hong Kong recently broke the world record for overclocking a single 16GB DDR5 memory module. The overclocker, who goes by the handle “lupin_no_musume”, published their work on the overclocking site, HWBOT, achieving 9560Mbps or 4778MHz.

Based on the HWBOT details, musume made the achievement using a single 16GB of G.Skill Trident Z5 DDR5 RAM. To do this, musume paired the memory module with an ASUS ROG Maximus Z690 APEX motherboard, a board that is said to have been designed specifically for extreme overclocking, as well as a Core i9-12900K. On top of that, musume also had to run the memory at extremely high CL timings of 120-120-120-120-127-2. Oh, and they also used liquid nitrogen (LN2) in the process.

Additionally, this new world record also comes two weeks after musume posted a previous record, where he managed to push the same, if not similar, Trident Z5 DDR5 RAM module, up to 8888Gbps. For all their hard work, the overclocker currently holds 1st rank across all three ranking HWBOT ranking positions.