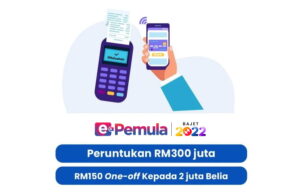 The Ministry of Finance (MoF) today announced that the ePemula program will take place from tomorrow onwards, 11 April. First announced during the tabling of Bajet 2022 last year, the RM300 million program will provide RM150 e-wallet credit to around two million Malaysians aged 18 to 20 years old.

In addition to that, full-time students at public and private higher education institutions from diploma level onwards are also eligible for the program. Eligible individuals can choose to obtain the credit via one of the four official ePemula e-wallet services: BigPay, GrabPay, ShopeePay and TNG eWallet.

According to the program’s mini-site, they can apply for the free e-wallet credit from tomorrow until 1 June 2022. However, they can’t keep the credit around forever though as they only have until 10 June 2022 to spend them.

Naturally, the free credit will only be distributed into just one e-wallet service. In other words, if you have successfully obtained the ePemula credit through ShopeePay, then you will not able to get it from BigPay, GrabPay, or TNG eWallet.

Based on our quick visit to the ePemula mini-sites by all four e-wallet services, some of them have hinted that they will be providing bonus perks on top of the free RM150 credit but none of them has revealed what exactly those perks will be. If you are eligible for the free credit, you may want to come back to those sites tomorrow and see which perks benefit you the most before submitting your ePemula application.