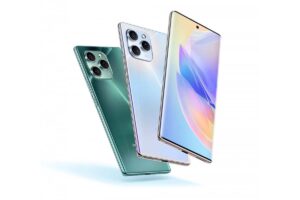 Honor has recently launched a new addition to its Honor 60 lineup in China, a series that initially debuted in November of last year. The latest model, known as the Honor 60 SE, is an entry-level smartphone which offers a significantly large display and a Dimensity chipset, among other things.

In terms of design, the front profile of the SE variant almost looks no different from its siblings; complete with a curved display that comes with a top-centered cutout for its selfie camera. Meanwhile, its rear profile differs greatly from the standard and Pro models, especially for its camera array. Instead, the Honor 60 SE features a triple camera arrangement that unmistakably resembles the one found on current generation iPhones. Interestingly enough, it is so far the only Android smartphone to draw inspiration from Apple’s device in this regard.

Specifications-wise, the Honor 60 SE sports a 6.67-inch OLED display with a resolution of 1080 x 2400 pixels, 120Hz refresh rate and 100% DCI-P3 colour gamut coverage, which is quite similar to the vanilla model. Under its hood is a 5G-enabled MediaTek Dimensity 900 chipset, paired with 8GB of RAM and up to 256B of internal storage.

Meanwhile, powering the device is a 4,300mAh battery that features 66W fast charging support via USB-C, as well as 5W reverse charging capability. Other than that, it also comes with an under-display fingerprint scanner, Android 11 via the brand’s Magic UI 5.0 interface, and Bluetooth 5.0 support.

As for imaging, what has been disclosed by the company for now is that the aforementioned triple camera array on the phone’s back consists of a 64MP primary shooter. Unfortunately, Honor did not detail the other two remaining sensors or the display’s built-in selfie camera.

The new Honor 60 SE is slated to go on sale in China starting from 18 February, and is available in Silver, Black and Jade Green colours. In terms of pricing, the 128GB configuration will be sold at CNY 2,199 (~RM 1,446) and the 256GB version is at CNY 2,499 (~RM 1,643). Honor has yet to confirm whether the new phone and its siblings will be made available in Malaysia.