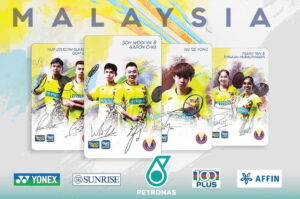 Being a sports-crazy country, there is always something around the corner for Malaysians to cheer on. Now that Harimau Malaya’s AFF Mitsubishi Electric Cup campaign has ended, the attention of the public has switched to the ongoing Petronas Malaysia Open 2023 which is the first outing of this year’s BWF World Tour Super 1000-class tournaments.

In conjunction with the event, the Badminton Association of Malaysia (BAM) has collaborated together with Touch ‘n Go to release a set of Enhanced Touch ‘n Go NFC cards featuring national elite badminton players that are participating in the event.

For those who are not familiar, the list includes men’s double players, Aaron Chia and Soh Wooi Yik as well as another men’s doubles pair, Nur Izzuddin Rumsani and Goh Sze Fei. There is also a card featuring women’s doubles representatives, Pearly Tan and Thinaah Murautharan while the men’s single player Ng Tze Yong received his own card.

As you can see from the image above, each of the cards not only featured the players but also their signatures. Aside from the release date, neither BAM nor TNG have revealed other details regarding these specially-made TNG NFC cards though.

For one, we don’t know whether they would be sold in a set of four or individual cards and there were no words about their price tags too. Even though the standard TNG card costs RM10 per piece, the special edition variants were priced much here based on previous releases.

All four cards will be made available exclusively through the TNG booth at the BAM Juara Fest area at Axiata Arena from Saturday, 14 January to Sunday, 15 January. While we are at it, TNG is also offering the TNG NFC card and RFID bundle but you don’t have to wait until this weekend to purchase it though as the bundle is already available at the booth right away.

So, if you really want to get your hands on these cards, you better be prepared to face a long queue and a huge number of crowds given that the release will be taking place on the final two days of the Petronas Malaysia Open.