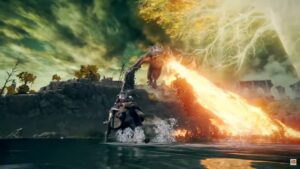 Elden Ring is set to release next year, with its network test, or beta, having taken place last month. And it is reportedly thanks to the network test that spoilers for the game have made its way to the internet.

PCGamesN reports that the leaks include voice lines and other story details which have been datamined from the network test. This was reportedly made possible with the relatively recent PS4 jailbreak that allowed hackers to dig into the game’s files. And as is the natural way of things, these details laid bare onto the internet.

The Elden Ring network test looks to have indirectly hit anticipating fans extra hard. Not only were the access keys to the beta scalped for nonsensical prices, but it also provided an avenue for dataminers to find juicy info on the game.

On one hand, spoilers are nasty for anyone who just wants to go into the game as fresh as possible. But on the other, this is still a FromSoftware game. Even if the setting was made by George R. R, Martin, it’s probably safe to say that the lore behind Elden Ring is as cryptic and vague as the Souls titles, Bloodborne, and Sekiro: Shadows Die twice. That being said, if you absolutely must avoid spoilers, then it’s another thing to be careful about on the internet.

The post Elden Ring Spoilers Have Been Datamined From Network Test appeared first on Lowyat.NET.