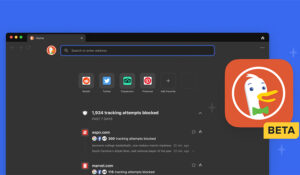 DuckDuckGo, the privacy-first search engine, has launched a desktop browser beta app for Mac. The company initially teased its plans for a desktop browser last year, with this being the first public version being rolled out, though you’ll need to wait for an invite code for this beta.

Just at is previously said, the new browser isn’t based on Chromium like most major browsers, but is instead built on the Mac’s website rendering engine for a leaner experience. DuckDuckGo claims that its Mac browser is already faster than Google Chrome on graphics performance and on top of that, it uses 60% less data due to its comprehensive tracker blocking.

The privacy-focused browser has DuckDuckGo’s search engine built-in, a tracker blocker, cookie pop-up protection, and the one-click Fire Button that lets you close all your tabs and browsing data immediately. It also has built-in Smarter Encryption that leads you to the HTTPS version of a website by default and a privacy feed that lets you clear any stored data on recently visited sites.

To get access to the beta, you’ll need to download the DuckDuckGo mobile app, open the settings, and join the private waitlist for DuckDuckGo for Desktop. The company says that while only the Mac version is available for now, a Windows version will be coming soon.