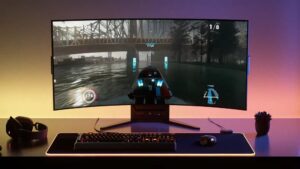 We’ve seen foldable display panels almost exclusively on phones up until now. But as it turns out, a more practical application of foldable screen tech – though not by much – is using it on gaming monitors instead. And Corsair has done just that, with its Xeneon Flex.

Perhaps it is more accurately described as bendable rather than foldable. It even comes with handlebars on both ends of the monitor, so that you can give it up to an 800R curve whenever you feel like it. Either way, the Corsair Xeneon Flex is a 45-inch flexible OLED WQHD display with a 21:9 aspect ratio, the exact resolution being 3440 x 1440. The company claims that this combination of screen size and aspect ratio gives it 20% more screen area than the average 49-inch 32:9 display.

The display panel itself is sourced from LG, which the company claims gives it a 1000nit peak brightness and a 1350000:1 contrast ratio. There’s also the South Korean display maker’s protective Low Blue Light tech to reduce eye strain.

To list is gaming credentials, the Corsair Xeneon Flex comes with a 240Hz refresh rate, a 0.03ms GtG response time and 0.01ms on/off time. It is also compatible with both Nvidia G-Sync and AMD FreeSync Premium. Whether or not you game with it, the company claims that it comes with a “sophisticated” burn-in prevention system to prevent both burn-ins and dead pixels. The company is also throwing in a three-year warranty that covers both to prove that the tech is up to par, but stops short of explaining the way it works.

Corsair says that its Xeneon Flex, or to give it its full name, the Xeneon Flex 45WQHD240 OLED Gaming Monitor, will be on display during Gamescom 2022 this week. But if you’re looking to get one, you’ll have to wait for a bit more, as “further details of launch, availability and final specifications” are only coming later in the year.

The post Corsair Xeneon Flex Is Both A Flat And Curved Monitor appeared first on Lowyat.NET.