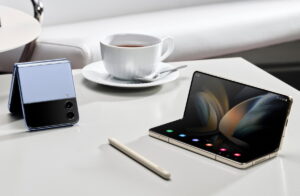 Following the Samsung Unpacked event, local telcos are putting up pre-orders for both the Galaxy Z Fold4 and Galaxy Z Flip4. Celcom is no different, offering both devices to go with its MEGA Lightning and Unlimited postpaid plans.

One thing that seemingly all telcos have in common with their pre-order offers is the 1-year Samsung Care+ extended warranty. And like Maxis, Celcom is offering only the 256GB and 512GB storage options for both the Samsung Galaxy Z Fold4 and Galaxy Z Flip4. The former device will also get its Standing Cover and S-Pen, as well as a Galaxy Watch4, while the latter will be bundled with its leather cover and the Galaxy Buds Live.

For its eligible plans, the telco kept things pretty straightforwtard. You can pre-order the Samsung Galaxy Z Fold4 or Galaxy Z Flip4 with the Celcom MEGA 98, 128, 158 and 188 plans, with either the Unlimited or Lightning options. You can also choose whether you want to go with the standard device bundle and pay for your device of choice up front, or go with the Easyphone instalment option. All of these options come with a 24-month contract.

One additional benefit that Celcom is offering to existing subscribers of its device plans that sets it apart from the other telcos. Where most other telcos require subscribers to have no active device contract, Celcom allows you to get a new one if your existing device contract has less than 12 months left to it. Though it’s important to note that this is only for the regular device bundle. The EasyPhone instalment plans must still be completed as usual before you can sign up for a new one. You can find out more on Celcom’s pre-order promo for the Samsung Galaxy Z Fold4 and Galaxy Z Flip4 by hitting the link below.