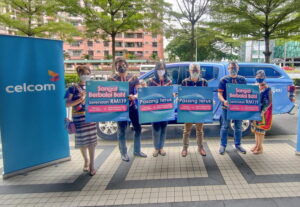 Consumers in selected areas within Sabah are now able to obtain Celcom Fibre service within the same day of their registration. That is the promise that the telco aims to deliver through its new Pasang Terus campaign.

However, there is a catch: the same-day installation only takes place during the weekend and the location varies from one week to another. This is because the Pasang Terus campaign revolves around the whereabouts of the Celcom bluecube Truck.

For example, the Celcom bluecube Truck will be heading to the Beverly Hills Apartment Phase 5 in Penampang this weekend, 9 and 10 April. When the Celcom crew is there, residents can then register for the Celcom Home Fibre service with them and expect the installation team to pop up at their homes within a few hours after the registration is completed.

Here is the full schedule:

At the moment, Celcom Home Fibre plans for Sabah come with a download speed that ranges from 20Mbps to 1Gbps. As part of the Pasang Terus campaign, Celcom is bumping up the speed of its 100Mbps plan to 200Mbps without any changes to the plan’s existing monthly fee of RM120.

Additionally, the telco is also offering up to three months of rebate for customers that have also signed up for the Xpax Postpaid 60 plan together with the fibre plan. Here is a summary of what’s in store for Sabah consumers through the Pasang Terus campaign:

Since this promo is only available in Sabah, the Pasang Terus section on Celcom’s website supposedly can only be viewed if you browse the website from there. Well, it turns out that is not entirely accurate though, as we managed to figure out the exact link for the section anyway.

So, visit this very link if you want to learn more about the new Sabah-exclusive Pasang Terus promo from Celcom.