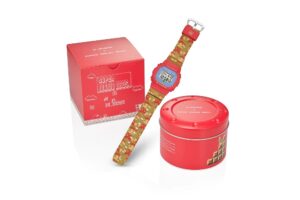 Nintendo’s Super Mario is an immensely popular character, worthy of being the special edition theme of many products. For watches, the character has his theme plastered on Tag Heuer watches at least twice now. More recently, it is the turn of Casio and its G-Shock line of watches.

Unlike the two Tag Heuer iterations, the G-Shock take on a watch with the Super Mario theme is decidedly retro. The specific model to get the special edition skin is the DW-500SMB-4, with blue and red on the main body, and green on the strap. Beyond the very bright body, there’s a Koopa shell at the bottom section, just above the G-Shock branding. On the strap, you get pixel art of Mario in his original NES games.

Beyond the special Super Mario paint job, the watch is mostly similar to the other models in the very large 5600 series of watches. This means a weight of about 53g, a battery life of about two years, a 200m water resistance. Naturally, it will also share the features of the other watches in the series, which should be familiar to anyone who has ever owned a digital watch from the brand. Perhaps one last standout is the backlight, which also features a silhouette of a jumping Mario with 1UP next to him.

On the Casio website, the Super Mario special edition G-Shock is listed with a very general release date of November 2022. Trying to pre-order it on the US site shows an estimated shipping date of 11 November. Unfortunately, it’s not yet listed on the Malaysian site, so there’s no price for it just yet. It’s not easy to guess what the price will be either, since the prices of the 5600 range varies wildly, from under RM500 to approaching RM1000.

The post Casio G-Shock Gets Its Turn At A Mario Collaboration appeared first on Lowyat.NET.